Genesi, the parquet that takes life back to its origins

It seems like a play on words, but this is the essence of Genesi (Genesis). The new parquet line from the Corà Evo Garant collection is wood that can re-evoke its origins. It can tell its whole life cycle, from seed to plant, from nature to matter, without any gaps. It is a story carved into a surface that requires step-by-step exploration to discover the wonders of the raw effect of wood that seems to have been freshly cut. 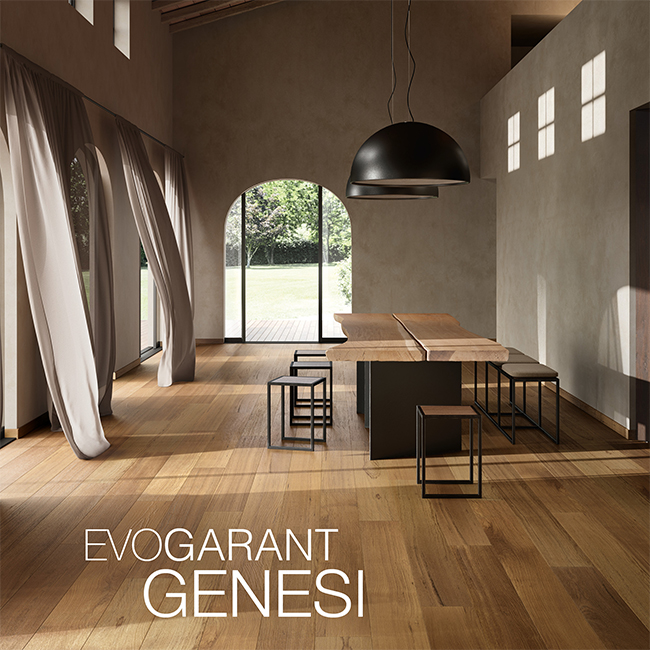 Genesi is a proposal signed by Corà Parquet, launched together with Century during the centenario del Gruppo Corà: (100th anniversary of the Corà Group): two lines that choose to go back through history, that choose to propose the fascination of wood that is lived-in, or in this case primordial, but whose heart looks at technology, research and innovation as it moves forward.

Genesi, everything begins from here

Genesi is parquet proposed in various formats and sizes to dress any floor with nature in a tailored manner. It comes in various wood species, for example Black Walnut, National Walnut, European Oak or Burmese Teak. Its strength lies in the visual and tactile impact of a floor designed to be a point of excellence in the design of every room. Its aesthetics exalt the most natural aspect of wood, returning it to its natural form.

Each board is like a small piece in a large mosaic, with a succession of concentric rings whose centres are the origin of everything: movement, growth, time that passes, order generated by chaos. The irregular ripples on the surface are the most characteristic effect of the slightly brushed finish, which adds three-dimensionality to the delicate, refined surface. For a spectacle that always begins with a new storyline about sight and touch.

From origins to eternity

The creation process of Genesi parquet is where opposites meet. On the one hand, it still has all the energy of wood in its first stages of life, uncontaminated, recently caressed by the first steps of processing. On the other hand, however, the original effect is made long-lasting by hard work in research and production innovation. In addition to the aspect of freshly cut wood its finish can guarantee the same performance levels, in terms of robustness and longevity, of any other Corà wood flooring without affecting the unique aesthetics.

Genesi is treated with a special, new concept raw-effect varnish that stops oxidation and colour changes over the years, so eliminating the main signs of time that generally accompany wood surfaces as they age.

A floor for indoor wellbeing

Genesi is also the origin of wellbeing at home. In the same way as the Evo Garant and Design lines, this parquet guarantees maximum sanitisation, because treated with vernice igienizzante

HC “High Care” Corà (sanitizing varnish). Its special formula, which contains silver ions, creates a protective barrier that is lethal for any pathogenic microorganism that comes into contact with the wood. The protection it provides is long-lasting, resistant to any cleaning operation, but still leaves the beauty and tactile surface effect of this product unchanged.

A return to origins

If you love things that last but don’t want to give up on the wonder of natural wood, if you like feeling parquet under your feet, if you want to walk in a new life with every step you take, choose Genesi. Return to the beginning with us.